The idea came from the Brett genome itself, where it’s possible to find Mycovirus fingerprints pointing to a battle between Brett and Mycoviruses occurring naturally over millions of years of evolution.

Brett is the common name of Wine´s villain Brettanomyces. This yeast produces 4-vinylphenol and 4-ethylphenol, the typical off-flavors, recognized as animal odor, barnyard, horse sweat, medicine, or animal leather that are the current nightmare of winemakers and wine lovers alike.

Brett’s uncertain origin can also contribute to its legendary status. Scientific publications (and Biome Makers' own experience) indicate that Brett is detected in less than 1% of total vineyard soils and grapes tested and that their detection abundance is very low, comprising only 0–3% of the total yeast population present in the grapes. Curiously, some of the cases that we reported were related to recycling press waste as compost.

As an entrenched enemy, Brett hides in depths of up to 8 mm in the wood barrel staves, corresponding to the maximum level of wine penetration, staying alive by generating biofilm structures. But that's not all, this arch-villain of wine also exhibits extraordinary superpowers, like an exceptional resistance to alcoholic conditions within a minimal nutrient environment and slow growth characteristics, plus a diversity of carbon sources that it can metabolize giving it the advantage to develop more easily than other yeasts during the latter stages of the fermentation process. For instance, it can grow using low amounts of trehalose and cellobiose, sugars present in wine and not consumed by other yeasts such as Saccharomyces cerevisiae. Also, Brett can grow in conditions with ethanol as the sole carbon source. In some cases, other yeast's autolysis after alcoholic fermentation could be a nutrient source for Brett’s growth. Moreover, Brettanomyces can use nitrates as a nitrogen source, giving it yet another advantage over its competitors.

In the fight against this villain, the arsenal of weapons developed to combat it is wide-ranging. For example, traditional wine sulfur treatment of up to 2.1mg/l in wine, burning sulfur pills, ozone, UV, plasma, and water steam wash are the typical treatments in barrels.

However, like Will Smith in the film, "Independence Day," at Biome Makers we explored the possibility of a viral infection to hack Brett. The idea came from the Brett genome itself, where it’s possible to find Mycovirus fingerprints pointing to a battle between Brett and Mycoviruses occurring naturally over millions of years of evolution. The project was led by Biome Makers under an INNOMICROVIN project granted by the Spanish Government (Retos Colaboración program) with the participation of Matarromera winery and the Autonomous University of Barcelona.

To find potential viruses that could be used against Brett, spoiled Brett wines were collected, centrifuged, and filtered in special conditions. The different supernatants obtained were used in drop tests. As a result, some supernatants were effective in creating inhibition areas using a Brett plate culture (Figure 1) but not in Saccharomyces cerevisiae culture. This shows that some chemical compounds or biological entities in the supernatant are effective for killing Brett with high specificity. Pictures from the inhibition areas using a transmission microscope showed structures that resemble certain viruses (Figure 2). Results have yet to be confirmed, but we hope to open up a new, biologically-inspired approach in the fight against Brett. 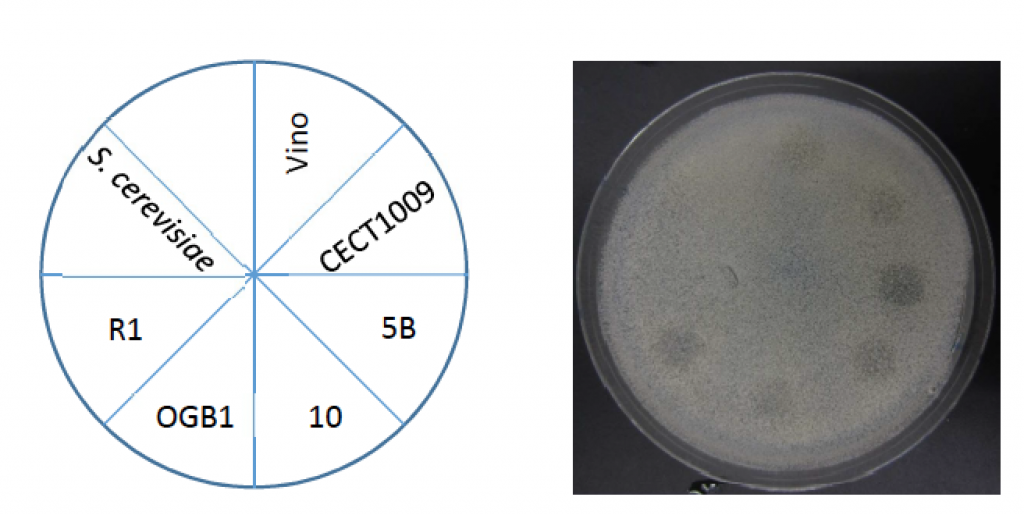