One small step for a soil microbe

One small step for a soil microbe; one giant leap for space exploration. From agricultural soils to colonizing Mars.

Are we alone in the Universe? This is one of the questions that NASA's Perseverance rover expects to answer after landing on Mars. They are looking for possible signs of ancient microbial activity in the soil. However, to better understand the mechanisms that could allow extra-terrestrial life, researchers are not only looking outside of Earth but also inside.

There is no life without microbes. More than 4 billion years ago, they were the pioneers who colonized an inert and incredibly hostile environment. Today we know microbes adapted to incredible conditions; we call them extremophiles. Extremophiles are able to live up to 100 degrees Celsius, in acidic lakes, in hypersaline environments, or under huge doses of radiation. Notable examples are those of the bacteria of the genera Deinococcus and Thermococcus, which managed to survive almost 600 days exposed to cosmic rays and without oxygen.

It is not illogical to think that they could survive galactic traveling outside the Blue Planet and transform those hostile environments, producing the right conditions for other species to thrive. They may be the precursors to human colonization of other planets and agro-space farming, as they were on Earth billions of years ago.

If there are any candidates on Earth who could conquer space and other planets, those would be the extremophiles. Could it be that the keys to the search for extra-terrestrial life are paradoxically right on our planet?

Interestingly, several of these microscopic super-powered creatures, or Extremophiles, have been detected by the smart microbial discovery startup, Biome Makers, thanks to the world's largest database of soil agriculture samples that they have. For example, the extraordinary genus Deinococcus was detected by Biome Makers in sugar cane crops from Mexico.

Another especially resistant microbe, the extremophile cyanobacteria (cyanobacteria are photosynthetic bacteria) Chroococcidiopsis, has been found by Biome Makers thanks to a systematic mapping of the soil microbiomes in vineyards of the Old West (California, US). Chroococcidiopsis can thrive in extreme temperatures, ionizing radiation, high salinity, and desiccation. Thanks to its resistance and its ability to produce oxygen through photosynthesis, researchers consider Chroococcidiopsis an ideal candidate to withstand the conditions on Mars.

In 2018, bacteria were isolated from extreme environments and challenged with typical Martian environmental conditions. This project was called Mars Analogues for Space Exploration and found some remarkable survival abilities in bacteria of the genus Buttiauxella, which is also represented in the Biome Makers database. 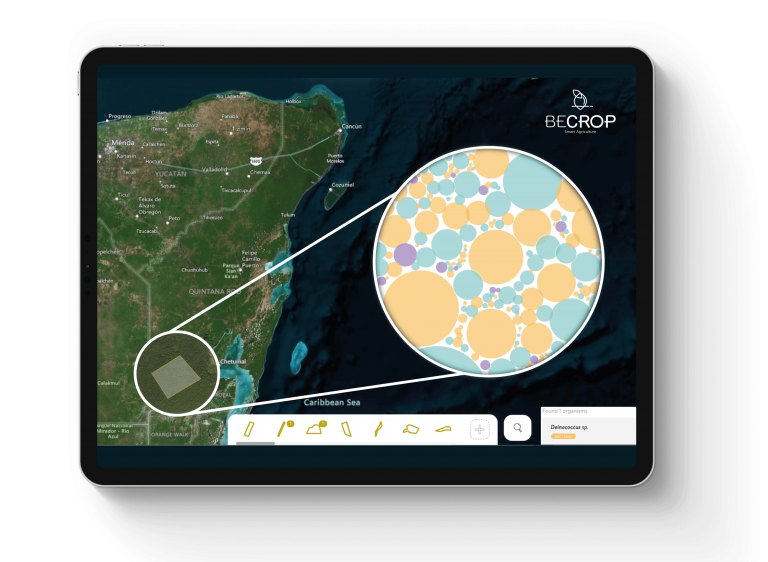 Figure: Location in Mexico where Deinococcus was detected by Biome Makers.

Due to their unique suitability for colonizing and surviving in extreme environments, microbes were the first astronauts. We have been sending microbes into space for the last 50 years to see how they react to alien conditions, but we are still at the dawn of astrobiology, with a huge and exciting amount of research to be done.

In September 2019, NASA ran the MARSBOx experiment, where they sent a scientific balloon with different microbes (bacteria, molds, and yeasts) into the stratosphere. Conditions in the Earth's stratosphere are comparable to those on the surface of the Red Planet. The spores of the black mold, Aspergillus niger, and cells of the bacterium Salinisphaera shabanensis returned alive from their trip to the stratosphere, where they suffered drastic changes in temperature, extreme desiccation and received 1000 times the dose of ultraviolet radiation that would cause human skin burns. Aspergillus niger is detected quite frequently in agricultural soils by Biome Makers, as well as Salinisphaera, a genus that can tolerate high concentrations of salt.

Could microbes feed us too? In space travel, it can take a long time to get from one place to another, and space on the spacecraft is limited. Imagine if we could create a self-sustaining, limitless way to feed space travelers. And of course, once again, microbes are here to help. Microbes have been a part of the human diet for thousands of years, and evidence of the use of fermenting microbes to produce beer has been found since 7,000 BCE.

Researchers at Penn State University have found an innovative way to transform human waste into food. The microbes were fed human waste, which they digested anaerobically (meaning, without the need for oxygen). Oxygen is a precious gas in space, and the fact that the waste can be digested in its absence is another plus of this project. Bacterial digestion of human waste produced methane, which could be used to feed different bacteria (Methylococcus capsulatus). Methylococcus capsulatus is currently used as animal feed, and it could be a fairly complete food source for astronauts! Furthermore, bacterial digestion could not be the only source of methane as the Mars Curiosity rover found organic matter on Martian soil and methane in the Red Planet’s atmosphere.

And what about the materials for construction or manufacturing on other planets? It will be difficult to supply future alien colonies with these materials from Earth using rockets! Microbes may also be the answer to this. We know that there are bacteria that feed on minerals and release metals; we call them bio-miners.

In 2019 an experiment called BioRock was conducted to test whether bio-miners could carry out their activity in simulated gravities of other planets, and one of the tested bacteria could. Finding bio-mining microbes able to live outside the Earth will be really useful one day to bring rare elements to earth from other planets to Earth and also to supply future colonies of construction metals.

Now, let’s transport ourselves to a future in which we have traveled to another planet to build the first human colony. We managed not to get sick on the trip, and we did not contaminate anything on arrival. We are beginning to create a breathable atmosphere in our bubble colony using cyanobacteria, we are obtaining metals for construction thanks to the bio-miners, and we are slowly transforming the planet’s surface into soil, which will eventually support space agriculture. In this colony, while we get some potatoes going, like in the movie “The Martian,” we will be eating delicious microbial goo, and we will have finally managed to conquer space thanks to the power of microbes.

We are on the verge of great discoveries related to extra-terrestrial life, and the engine that will allow us to answer our questions will be research and knowledge of our microbes. Thanks to a comprehensive analysis of the microbes that live in soils around the world, Biome Makers has the ability to assist in the quest to find the most resistant superbugs and even discover new ones, which could be used for extra-terrestrial microbiology research.

By having eyes on soils worldwide, Biome Makers can easily access their databases to obtain information such as the location of the microbe, the characteristics of the physical-chemical environment in which they inhabit, and the microbial community to which they belong. The diversity and richness of soil microbes are understudied assets that we must know and protect. Research on soil microbes is essential for sustainable progress both on and off the Blue Planet.